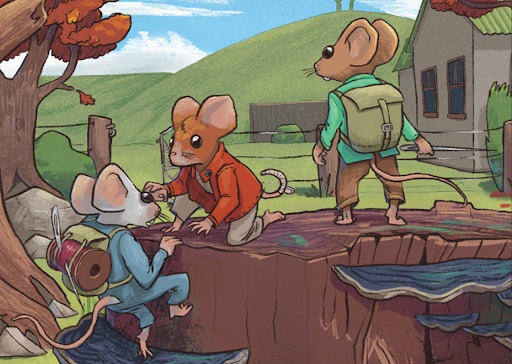 The Luck Roll has Changed the Game

I’ve been staying at a holiday home on the coast this week. My little family and another little family. Four adults and two little people. It is probably unsurprising that with two babies who don’t love sleeping in the house we didn’t have a lot of spare time for gaming. Which is what the four adults used to do all the time when we got together. But, we managed to steal 50 mins here and 40 mins there to play some Mausritter. This is a not review or detailed look at the game, just an aspect of it. If you want more details about the game you can grab it here or read this read-through by Chris Bissette.

That is the Luck Roll rule from Mausritter. It replaces knowledge rolls, skill rolls, and anything else that isn’t connected to the key stats and it fucks. It is elegant, streamlined, and transparent. The moment I introduced it to the table they were on to it. ‘So, I can just ask if something is there and if it rolls well it’s there?’

Yes (I mean, it says ‘it happens’ so that is how I understand the rule).

This little group has only played D&D before. They have never played another ttrpg. D&D is quite structured and it is expected to have quite a bit of planning done. There are highly detailed adventures and extensive rules that support that and most of the time there is something written down that explains what is there and why it is there.

The Luck Roll throws all that out of the window.

All of the players started to think in terms of what would work narratively in the scene to help push the story forward. They changed from asking, “Can I do a history check to see I know something about this place?” to “Did this place used to be a sacred shrine of the bat gods?” They took ownership of the world and started to think in terms of what they could uncover and imagine as opposed to trying to pry information from the GM.

Here are things that were not a thing but became a thing because of the Luck Roll.

The Luck Roll opens the conversation about the world and invites players to take part in the building of it. I’ve shared my thoughts on worldbuilding before and this works hand in hand with those ideas. I as GM do not need to be the holder of all knowledge and I do not need to spend hours (days even) world-building. But it adds something else as well. Simplicity to the mechanics of the character.

This roll removes the need for skills. Skills and skill checks are tedious things. They do not, in my opinion, add to the narrative and verisimilitude of the world the characters are exploring. The butcher knows how to cut meat, the wizard knows about magic, and the scholar can read books. And failing a roll that goes against those truths is damaging to the story.

It also makes for smooth storytelling and gaming. This is sleek streamlined design in my opinion. It takes seconds to roll and come up with a response. It removes any need to create complex details about dungeons or even know how traps or puzzles might be solved. But there is a trap there and they’ll figure out how to do it. They will. Those crafty players always come up with some sort of plan and the very worst thing is having to shut down their imaginative ideas. It doesn’t mean you shouldn’t have those things, or you need to stop doing them. But if they come up with better ideas, wild ideas, the Luck Roll can make it happen.

However, sometimes the Luck Roll doesn’t go in their favour. At first, we played it as if it were binary; it happens or it doesn’t. But we all know binary is bullshit. So, enter the spectrum. Something might have a 2 in 6 chance of happening but I roll a 3 though, bummer. However, it’s just 1 off being a truth, so let’s make it a half-truth, “Yes, there is mist but it isn’t mystical”. If they had rolled a 6 that would have been very unlucky indeed, “No, there is no mist and this creek leads to the Water Rats hideout”.

Fast and effective storytelling that reduces rules bloat and encourages player creativity. Is that not the dream?