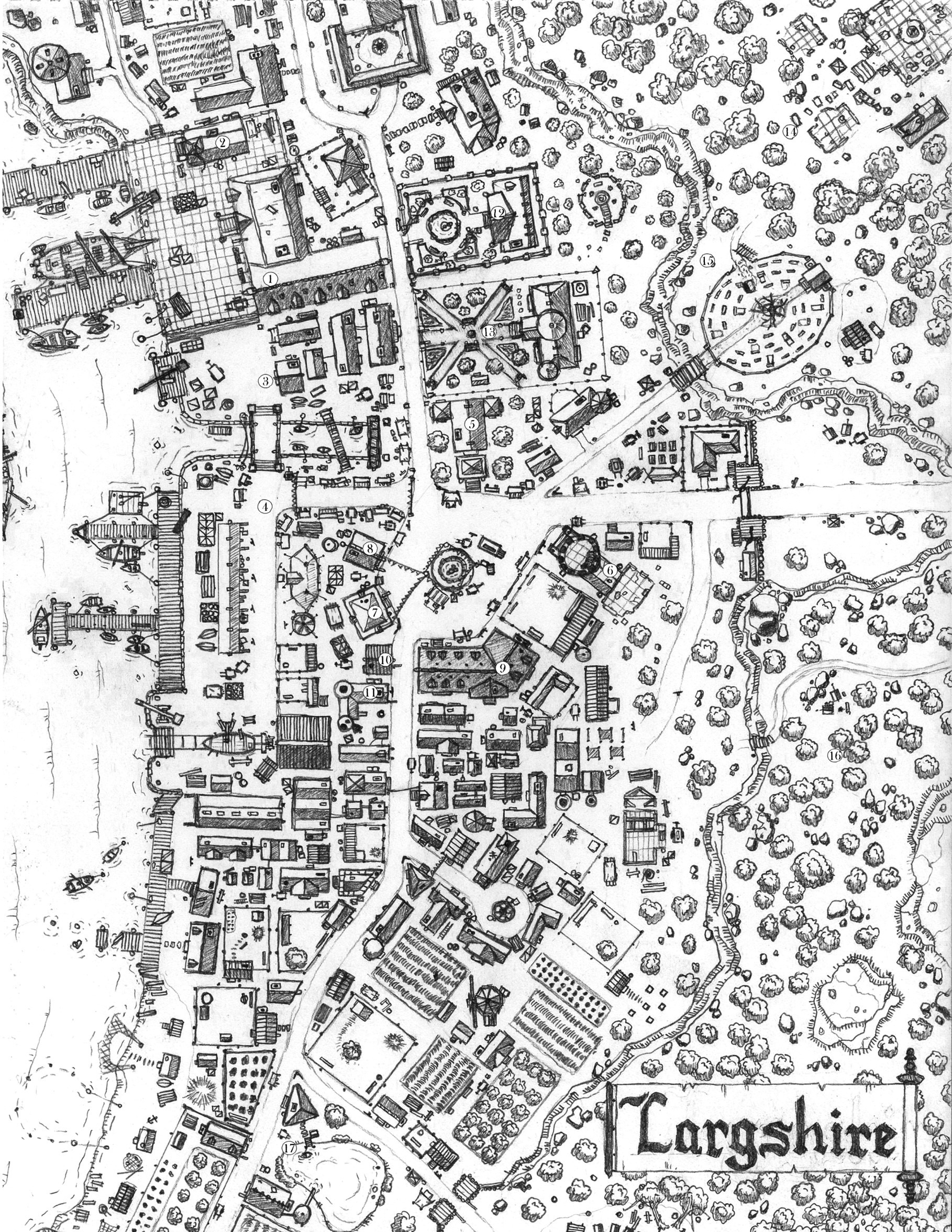 What is Largshire and Other things on Sale…

So, I launched an itch funding campaign last week. I had zero plans to do this. It was an interaction with an NFT dickhead on Twitter that spur me into action and got the ball rolling. I am funding this project now. Out of spite.

Probably not my wisest move. Nonetheless, I press forward with this idea.

Largshire is a mixture of my ideas of fantasy villages and the area that I grew up in. For a long time, it was the starting location for any fantasy campaign I ran. I tried to make it a living place that everyone who interacted with it had an impact on it. There was one session where the Pier Tavern was almost burned down. And another where a particularly thievy halfling that tried to steal a flying machine from an inventor. There wasn’t a flying machine in their workshop at the start of the session. But now there is and always will be. Unless stolen by a particularly thievy halfling, of course.

Largshire has a lot of history. It has featured heavily in Committee Quest, my D&D5E actual play podcast that is on extended hiatus, and was built through some interaction in that show. It was influenced by the early adventures we ran on it too, though the names have been changed to protect the innocent. It has been released before, on DriveThruRPG, but it was quite rough and I knew nothing about the copyright rules at the time. So, that’s a bit of a nightmare.

But here it is, back and read for some sweet art, a fresh layout, and removal of all things system. There’s the map. It’s fucking good. Ben, a good friend and Committee Quest cast member, drew this. It blew me away. So, this is the only art that is staying cause it’s fucking amazing.

What’s all this funding going to do?

Sweet art.
I want to get a colour cover and some interior art for this by a local artist, Sam Wannan. He has a great style that I really dig and I am keen to see what he can come up with. While I would love to fill this book completely with his art, I cannot guarantee that happening, a little will go a long way I think.

Layout.
The initial release of Largshire was done in word and it was the first time I had attempted anything like this. I have learned a lot about layout and composition over the years and now have access to InDesign and a few years of experience under my belt. I am keen to give this a refresh.

System-agnostic.
It was originally designed specifically for D&D5E with some stat blocks, magic items, and some new mechanics. But I have moved away from that idea with adventures and settings. I feel like these sorts of supplements do not need to be specific for any system and can in fact be more robust and immersive without the bloat of system jargon. What does this have to do with the funding? Well, it is being edited by Melody Watson. Another fellow South Australian and editor of tabletop RPGs. She has already done the initial edits and I am working through her suggestions and comments already.

What can you do to support?

Firstly, you can head over to the Largshire page on itch! If you’re interested in a print scroll down to the bottom of the page for the Physical Copy button. https://stuartwatkinson.itch.io/largshire

Secondly, you can get all my games from itch at a huge discount. All the money from this sale is going to buying more art: https://itch.io/s/66572/art-money-baby-zimo2022

Thirdly, I have a Patreon that is currently on hiatus but will be coming back online next month. The latest post there is all about what folks want out of the Patreon in the future, so now is a great time to sign up: https://www.patreon.com/stuartwrites

Thanks for reading folks!