It has been a while since I posted last.

My last post was titled February 2020: Rolling with Advantage. I believe I spoke too soon. I may have had advantage but I still rolled two natural 1s.

The last few months have been very tough. For many people. I was lucky enough to be in a job that was deemed essential and was able to continue to work. It was a strange and challenging time and while my job was politicised in the media, I kept my mouth shut. I will not go into any detail about it but I will say that those months were tough and school work consumed my life and deadened much of my creativity as all my energy was going into it.

I would sit at my desk in the mornings to write. And nothing would come out. I would end up scrolling through news, social media, and COVID19 data. It was not a good time. However, the work I did for the school and the students was important and successful.

Thankfully, I found something that sparked my creativity and made I created a little re-skin of a game called The Wretched by Chris Bissette (you should check them out if your interested in TTRPGs/music/writing/creative stuff).

So, I made this little game. The mechanics were already there, ready to go and I just wrote them up in a Post-Apocalyptic format. I spent a long time playing games like Fallout, reading books like Earth Abides and The Postman and I loved it. So, given this opportunity to be freely creative it was my natural direction. You can check it out below.

If you get it, and play it, let me know how it goes.

The artwork was done by an artist called Ferran Xalabarer and, unknown to me at the time, they were once an artist for Heavy Metal magazine! I fucking love this piece of art. Those two guys are terrifying. 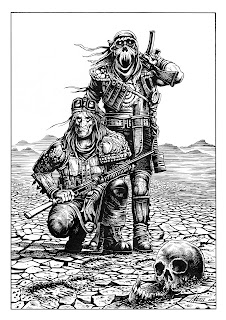 Wretched Wastesland was a part of a Games Jam on Itch.io so there are a heap of games that have been made based on the Wretched & Alone system, they are really interesting. You can find them here!

I finished my first draft of Oscar the Apprentice and discovered I had zero female roles. I toyed with the idea of changing some of the support characters, but it didn’t work. However… When Oscar became Emma it all fell into place.

I gave the rough manuscript to my wife, Hayley, to read. That was actually really confronting. But she liked it! We had a big discussion and I am now back at the keyboard working my way through a re-write. The process is long. But I have the bones of a good story and some great characters.

Caught at the Cross Keys

This a Dungeons & Dragons adventure I am working on. I just got it back from a developmental editor and it’s coming a long nicely! I got some sweet art work too 🙂 Check it out! 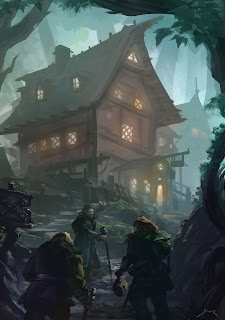 This will be available by the end of the month, I think.

If you want to support me you can do it in a number ways.

You could grab a copy of these TTRPG products;

Or you could sign up to Committee Quest’s Patreon!

Or you could donate to my KoFi!