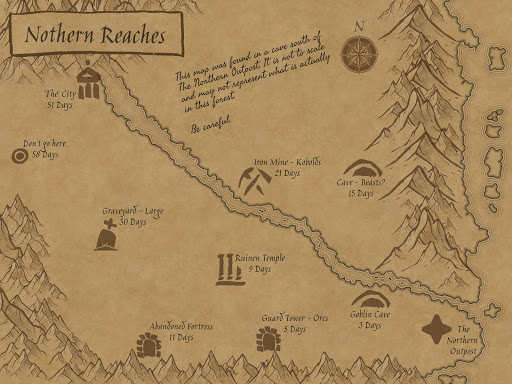 If you are playing in my game it is probably best you don’t read this. I mean, you can, but you will just spoil your experience in the game.

I really like maps. In almost every game I have run I have included a detailed map of the world. With those maps, I always have a strong sense of what is at each location, if not an adventure selected for it already.  However, for a West Marches style of game, the map I have made is slightly different. It’s not a to-scale, it’s not accurate, and it’s not current.
It is an inworld map created by a long-dead NPC. It’s the only map I will give the players at this stage. They might get more, but it will always be old, incomplete, or incorrect so that they learn not to trust what’s written on the paper. Why would I do this?

The map above is the only reference that the players have to the new world they are in. They have been told that maps are often unreliable and they should not treat them as lore. They are one person’s interpretation of the world and that one person has created it through their own lense. This also comes into play with other maps in the world.

This all applies to in-game handouts as well. Books, maps, notes and monsters talking will all unveil clues but will again be from the perspective of the NPC that created it or said it. I do not want to give them a map that is complete and accurate. This is also my stance on the locations they explore. If they get a map of a location it will be incomplete, or perhaps damaged, otherwise, the players will have to do the mapping based on the descriptions given at the table. I will share my adventure map vs. the player-made map in a later post. I think it worked quite well.

It is not just the players that have uncertainty with the maps they are using. There is no DMs map of this world either. I have not gone through and meticulously planned what each location has in it. I have no idea what is in those places, and that’s cool because when the players decide to go there the location will be fleshed out (adventure prep posts will cover this). This actually made me feel so much more relaxed about starting. I didn’t have to know everything that was happening everywhere. I can use the threads from past adventures and the player’s discussions to create adventures that contain all narrative and thematic elements to suit their goals.

Right now the only map the players have is the one above. They will soon learn that there is a lot more in the world than what is on that map. They will also learn that what is on the map is incorrect. Perhaps the location has changed, or perhaps the location is gone entirely. It will be up to the players to maintain a map of the world. If they don’t, well.. that information will be lost to them. I won’t be correcting the map.

And that scares me.

Next up how I am organising everything!