Nothing like a little admin to get you excited about playing RPGs, yeah?

Well, you’re in luck. Cause that’s what this is all about. The way I have been organising all the information for this little experiment.

The whole idea here is that I do not need to be the holder of information, the loremaster that holds all the answers. I really want the players to take on that role and become curious and engaged and WANT to explore the world that is available to them.

The major issue that I have had, and I imagine many GMs have experienced this as well, is players not taking notes or remembering key information. This can be particularly frustrating when you’ve spent weeks setting up a big reveal and when you describe the NPC that strides into the room and, and, and… No one recognises them.

I really like Discord and it seemed to me to be the best option to allow for easy communication, storage of information, and organising games. And so far it has done that. However, it did take quite a lot of time to set up, probably the most time for anything in this campaign. But look at it!

On the right are all the channels available to players and GMs to use. I tried to keep it as straightforward as possible, but as time went on I added more and more.

There are currently 9 players and 2 GMs and there are more to come. It’s a lot of people to give a spiel to and quite frankly don’t spiel too good. So, the #start-here section contains all the basics a new player needs to get a feel for what this space is all about. However, it is just a starting place and the subsequent channels elaborate more on what is available to them. You can see the information I gave them below. 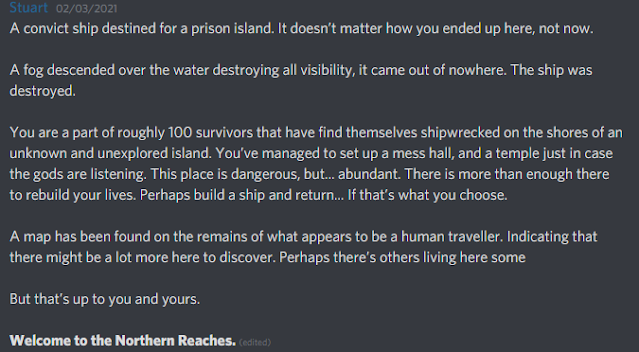 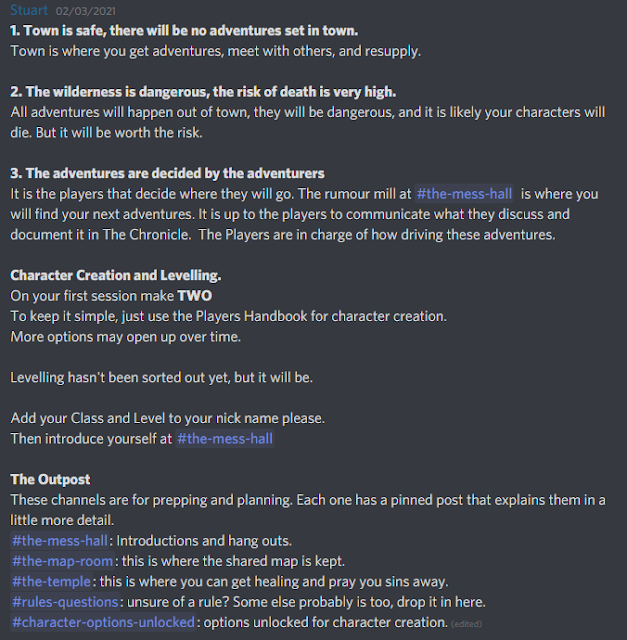 This has worked quite well so far, most players have been able to create characters and get a feel for the type of game before coming to the table. There have been a few clarifications and a few missteps but ultimately everything has run quite smoothly. However, as players are known to do a few were getting very invested in the creation and backstory of their character. This is great but I needed to clarify how dangerous this world will be so this little addition was added to the #start-here channel.

I will elaborate on the #the-mess-hall, #the-map-room, #character-options-unlocked, and THE CHRONICLE in future posts. However, if there are other sections you would like to know more about just hit me up!

We have now had two games, I have run them both and the other GM is running the next game this week. I will do a post on my game prep and the outcome soon. I will also update how the mapping is going in the #the-map-room post that is to come. It’s all going very well and the players are loving it (so far, eek!).