We Sail Beyond: A game of beginings 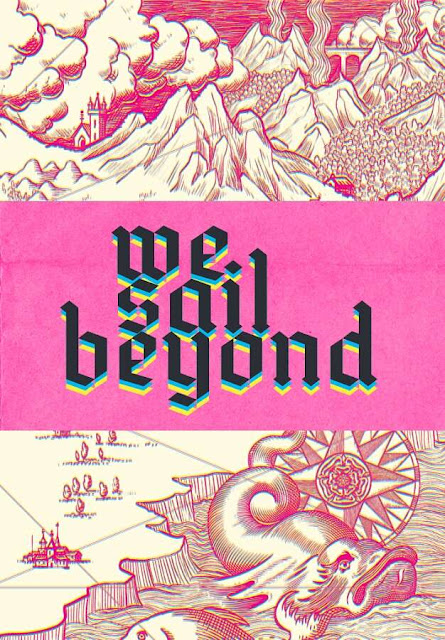 Three grizzled old sellswords sit at a round table in the Comely Sister telling stories, tales, and fables of the times before the gates shut. Before the Outside turned wrong. Their great grandfathers knew the Outside. Lived in it, fought in it, died in it. Their stories had been passed down to each generation and now these three sit with a tankard in one hand a quill in the other. They attempt to create a map of a land that no one has seen for over 100 years.

…and then go out into it.

This map, made by three players of my regular game, will be the catalyst for a short (surely) campaign starting in the coming weeks. I didn’t tell them that is the map they were making was going to be directly connected to the new game (however, I think there were some suspicions). 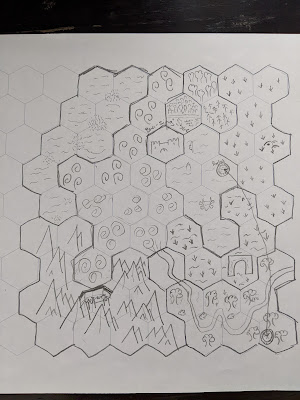 Maps are a special kind of artifact. They can hold the detailed information of an entire civilization. The literal geographical information as well the more subtle cultural beliefs that can be inferred from what can be seen. They capture an understanding of the world at that time of the map’s creation. They help us imagine a world larger than our everyday lives.

Personally, I have deep love and fascination for maps. I have four hung on the walls of this small study at the moment; a pirate-themed world map I picked up in Peru, two Forgotten Realms maps, and a map of Port Adelaide for a book I am working on. As a kid, rummaging through my brother’s D&D books, I was always drawn to the maps in the modules he had. They were a doorway into another world. I would pull down fantasy books from his shelf to find the maps in the opening pages. As I got older I wished that I had known what those books were so that I could read them, alas they must remain undefined memories.

Perhaps all this is why I have found such joy in playing and running We Sail Beyond. This is a game of pure creation, a game that ends with two maps both similar but both with subtle differences. The player map is filled with as many imaginative ideas as the players could come up with but the GM map holds to the true answers.

The game puts the players in the role of adventures sitting around the table of an inn (and there’s a table to roll on to let you know where) discussing what they know or have heard told about the land they’re going to explore. The players take turns to flesh out regions of a map using tables provided. The tables include locations, biomes, flora and fauna. It can get pretty out there, but the table can choose to reign it in if need be. The ‘rules’ are more of guide for creativity opposed a rigid structure that needs to be followed. Players can take turns for each region or share it all by rolling dice. 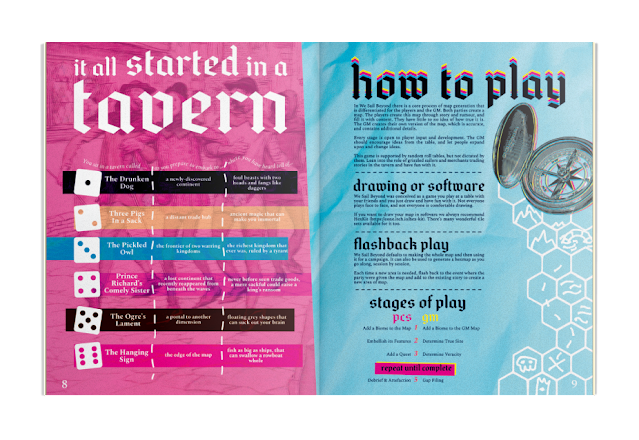 The GM then roles to see if the information on the player’s map is true, and if it is not true how far off are they. This is makes for some interesting creative options for the GM. For example, the players came up with an idea that there was a portal to another dimension in the swamp. However, I rolled that that was way off. So, the port just sent them back to the city. But those characters are sure that’s for another dimension.

It might be months before they actually get there and I’m so pumped for that to happen.

There is nothing complex or over bearing about this game. It is for sitting down with like-minded folks, rolling dice, and being creative. It was therapeutic to run as a GM. But you don’t really ‘run’ anything. You just let the players discuss and draw and make up incredible landscapes to explore.

At the end of the session we had a play map and GM map and a note book filled with ideas, quest hooks, and locations. This map will be going into the openning session an upcoming Warlock! game, which you can read about here. 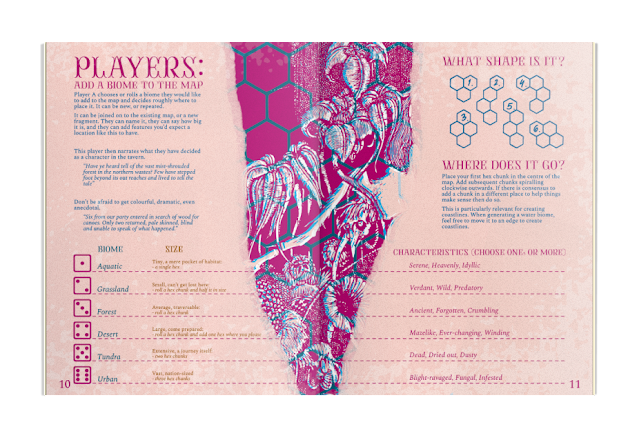 This, like many of the games from Sealed Library, turn game prep into a game that involves the players too. It fosters a collaborative space for the players to take control of the world inwhich they’re exploring. Through games like this you can start to remove the notion of GM as god that many tables have.

You can pick up We Sail Beyond here.