Ya know, I write some pretty cool shit.

I have spelling mistakes, sure. But fuck, man. I don’t drink enough water and have Tiny Human who yells at me in the night so that’s what’s going to happen.

Didn’t write about D&D this month so my blog stats are way down.

This is what the world has come to. I write badass little short stories, like the ones you’d get in an old-school magazine. Zip. But talk about initiative orders and all of a sudden, the numbers are through the roof (this is a thing that happened, that D&D is terrible for beginners post rustled some feathers). 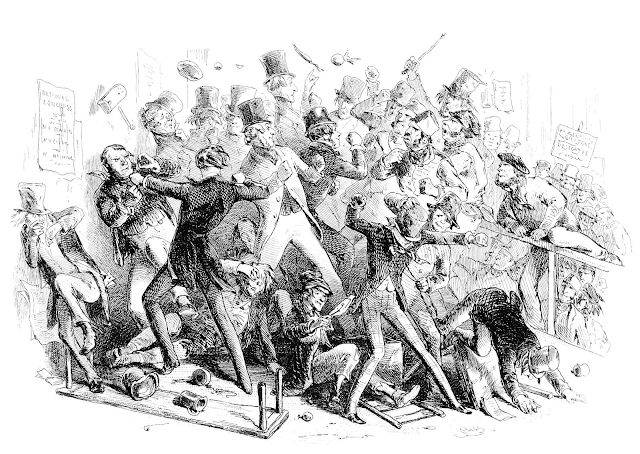 Have you ever been in a fight?

Like a pub brawl or street fight? A real one?

Most of the time folks are drunk and/or on drugs and everything is elevated. Everything. A heightened state of agitation and anger fueled by survival instincts, brain chemical secretions, and sometimes even training makes for one fearsome rucus.

I have been in a lot of fights. It’s not a thing I am proud of or a thing I condone anymore, but there was a time in my life when I thought (and still think) it was necessary. I live in a different place now and am surrounded by different people, and fighting no longer seems like a logical answer to much. You just end up hurting.

Anyway, I’ll give you one example. It was a Friday night at a seaside nightclub. One with a balcony overlooking the ocean. It must have been summer because I was out there in a t-shirt and there were a lot of other people too. This was not a classy place. It was the place that only locals went to on a Friday night and everyone got absolutely written off. No one travelled too far to get there.

On this particular night, there were three different groups of people. Three overlapping friendship groups. Everyone knew a few people from each group but no one knew everyone. They were all men.

I was talking to Hayden (the names have been changed to conceal the guilty), an old friend, and the Other Guy, whose name I can’t remember, so clearly wasn’t an old friend. Three of us chatted about whatever bullshit you chat about when Hayden is bumped and spills his drink on the Other Guy.

This is the catalyst. What I am about to describe all happened in about 12 seconds.

I step in between Other Guy and Hayden.

Some Other Guy punches me from the side, in the head, knocking me into the wall and dazing me.

Other Guy takes the advantage and starts laying into me.

Shane (and old friend) absolute pulverises Some Other Guy with one punch, and he sprawls onto the floor. Shane is tall and lanky and can fight very well. Watch the lanky guys.

The balcony erupts into chaos. At least six other people are involved.

I come out of my daze, stand up, get my bearings, put one hand up as a guard and punch Other Guy with the other, dropping him to the ground.

Coincidently, this happened as the fight ended. Bouncers arrived and kicked out a few people.

12 seconds of mayhem. That’s two rounds in Common. And I only had one turn.

No one waited for their turn. No one had time to plan. Everyone just acted. Some people were able to act many times before others could act once. Some people froze. It felt random and chaotic in a way that 5E combat does not. No fight I have seen or been in, with more than two people, has had any perceived order.

So, what is the solution?

Well, fucko. It’s something I didn’t even make. This isn’t some secret. Some bullshit homebrew that I want laud over you and show how much cooler my table is. Nope. It’s just a cool mechanic from another game.

During combat or at other times where it is important to know who goes first you will need to assemble the Initiative Stack. To do this get a container and a selection of coloured dice or other convenient markers (consider cards, poker chips, and so on).

5.1.1 Assign each character 2 Tokens of a single color.

5.1.3 Add 1 Token of a distinct colour to the Stack. This Token signifies the End of the Round.

It’s simple. It’s random. It’s chaotic. It’s easy to learn. There is no time to plan because the tides of battle are constantly changing. You must act fast.

That’s all I wanted to say.

Shove this initiative order up your 5E. Or just play Troika!