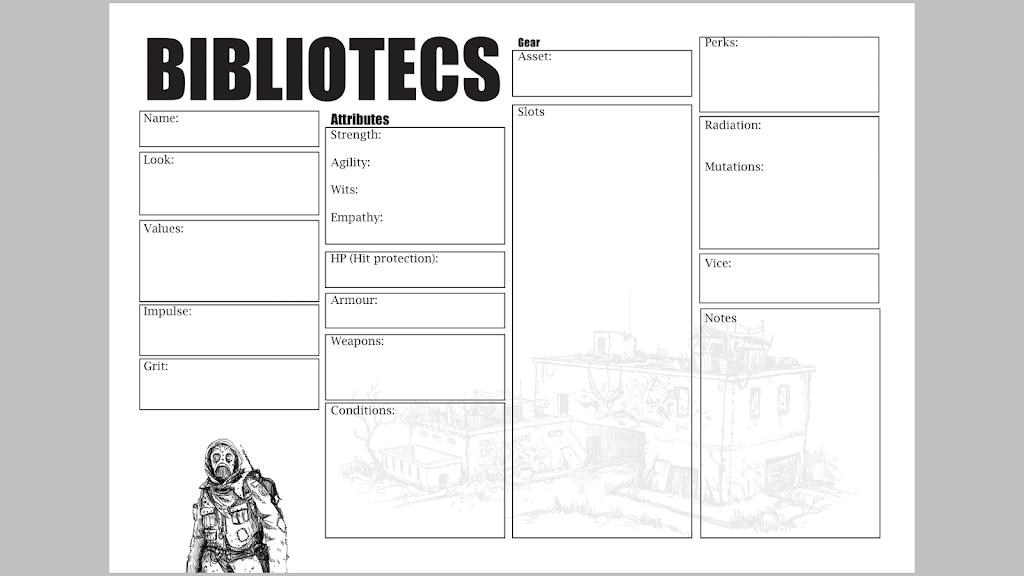 This post was originally sent as a reward to all Patreon supporters and is released freely on this site a week after its original publication.

Last week I playtested Bibliotecs for the first time.

It’s a game that can be played. It was also enjoyed by those that played it. These were all good things. But most importantly it felt like I was onto something.

The game uses a mixture of rules from Year Zero Mini, Cairn, and Troika. It’s a dice pool system that uses gear, mutations, and stimulants to define character. The game is about exploring ruins to find relics of the past. Which are often pop-culture memorabilia and collectables.

The big thing I want for this game is for it to be solo, co-op, and guided, and I want all three of those things to work in tandem. So that players can all play in a shared world but then meet up to face more demanding challenges. This might be done as a co-op exploration using the oracles or one person might take the role of GM.

That, at the moment, is the thing I am most excited about and our next playtest will be exactly that. I will do a separate post about preparing for that adventure.

During this first playtest we made a map and started populating it using the oracles. I have a range of oracles used to generate locations, regions, and inhabitants. We were playing co-op, and everyone gelled really well with the oracle’s style of ideation. So far, the entries on the tables all complimented each other and we were able to string together some really cool stories based on the rolls and locations.

We set our game in our local area which was cool. We were able to include all sorts of info we knew and talk about what that place would actually look like after 80 years. We also may or may not have based NPCs on some people we know.

Combat is where it fell down a little for me.

Dice pools weren’t big enough to guarantee successes on a regular basis so there were lots of missed shots and not really any consequence. When a weapon hits it has a scaled degree of damage and impact, so a hit will kill or get close to killing. However, hits were difficult.

Anyway, in future posts, I will include images too. I might do a Patron-only video soon too.

Things I am working on after Playtest 1:

That’s all for now.

Here’s a crappy character sheet I made for it.