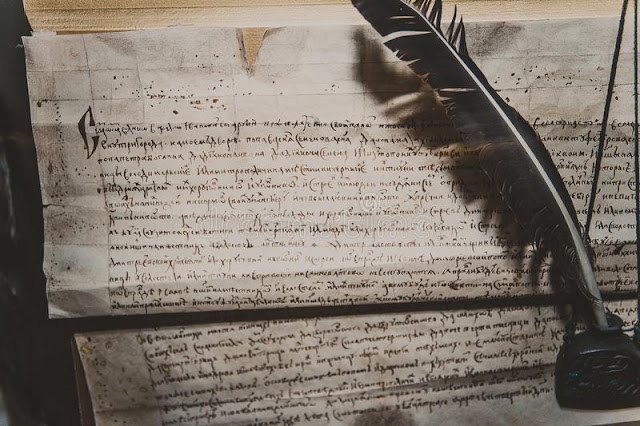 It is the players’ responsibility to document their adventures.

The notes that they take on their exploration into the wild become the lore they can refer to. They become the truth that exists in the world. It is the record that all players can research to find information, make connections, and influence decisions on where they want to explore.

In this game there are three types of information that needs to be recorded: an adventure write up that outlines what happened and what was found, the map, and the loot. During the game, at least one player is working on each of these tasks as the story progresses.

This does take considerable effort for the players. A write up at the end of the game can be taxing, and I envisage the enthusiasm they have shown for will it wane. As a result, there is an incentive in place for players who decide to engage with The Chronicle. Players can choose from the following two rewards:

Ask the Chronicle. A player can ask The Chronicler (a GM) a question about a location or clue and receive a truth response.
Feat Point. We are using the Point Buy Feat System by The Dungeon Coach. Players are rewarded 1 point that they can spend in the system each time they contribute to The Chronicle.

A few notes on these. At this point, anyone can add to The Chronicle so long as they are providing new information and perspectives. You can’t have two lists of the same loot added by two people, or two maps of the same location, but you can add to the adventure write up. So far, not everyone has added to The Chronicle as some players are not interested and happy just to progress as normal.

The possible access to small feats after every session does present a few issues. Characters will become highly customised and very powerful. Which, ultimately, isn’t an awful thing as this world is dangerous and they may perish at any time. But we (the GMs) are conscious of this and will discuss the possibility of limiting the number of Feat Points available. This also brings up the issue of reward options. With only two available now and the possibility of removing one at some point we will need to explore more options. One such option is connected to our ideas around base-building.

There will be a downtime base-building component introduced in the next few weeks. We are still working out how we are going to manage this, but over the next few adventures they will get access to a lot more construction resources (currently working on an undead lumber mill that has endless supply of trees from a corrupted druid).

All of this information is recorded in channels that the players have complete control over. They are able to add to edit anything they write in there. Players can also create new channels for new locations they explore.

The response to this method has been… overwhelming. The players have taken to it with reckless aplomb, and it has put a pep in my step. The write ups have been incredible. From detailed first-person accounts from the character’s perspective to cold and callus administrative documentation. Each has been excellent. This is part of players write up from The ‘Goblin’ Cave adventure. Reading this put a big stupid smile on my big stupid face for the whole stupid day. 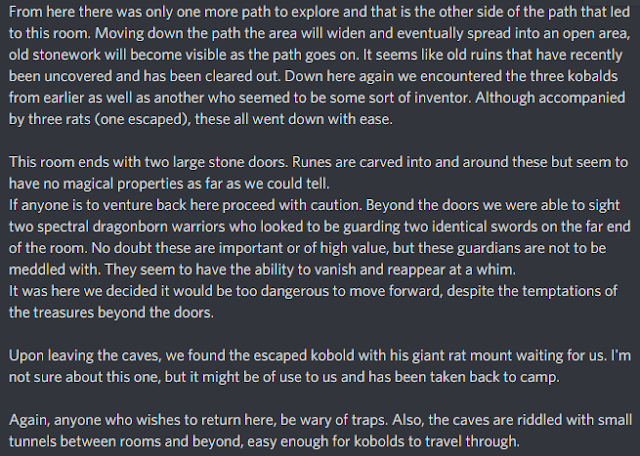 Oh, then there are the maps! They have been creating maps for the locations that they explore, such as this one which is based on the The ‘Goblin’ Cave as well. This was created just off my descriptions and I didn’t show them the original at all, I was thoroughly impressed.

They have also started to draw their own version of the location map, which is amazing. Having a real-life ecologist in the party is quite handy.

All in all, the chronicle reward method has been working fine. Excellent in fact. I am, of course, wary that it might not be fine at some point and I am preparing for that. Lots of player check-ins along the way, but so far things are running smoothly, and I can’t wait to see what they come up with next.

Next week I will dive into overland travel!

2 thoughts on “Northern Reaches 5 – The Chronicle”